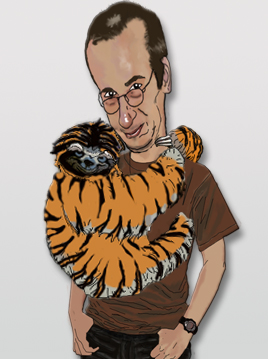 Welcome to the first in our series of interviews with people in the Infinity community. Approximately monthly, we’ll introduce you to a member of the Infinity team, an Infinity partner, or general person of interest. Our first interview is with our own Yanick Champoux.

Meet Yanick. A damn fine man. A programmer extraordinaire. A comic book writer. He is a native of Montréal currently living in Ottawa, Canada. The man contains multitudes.

When did you first work with Infinity?

What would you be doing if you weren’t in your current job?

The realm of possibilities is quite broad. My first degree was in Math (statistics), so I could very well have ended up working as a statistician. And then my first industry was telecom, so in a parallel universe I could still be working on IP routers and ATM switches. And then there is my (very modest) foray in comic book writing, which is currently on hold, but who knows when I’ll feel like dusting off the old typewriter?

What is your favorite time of day/week/year?

I’m quite fond of Halloween night. And those lazy snow days, where the whole world turns into the inside of a pillow.

What is your favorite mode of transportation and why?

I’ll go with trains. Due to a mix of being born in Montréal (which has a wonderful transit system), and sheer laziness, I never got around getting my driving license, so public transport is my way to go. And while buses and planes will get you there, trains are a more… civilized… way of getting around. Mind you, if zeppelins make a comeback, that might change my answer. :-)

What are six words to describe technology in your work? In your life?

“Out of chaos emerges order. Sometimes.”

What technology do you (realistically) look forward to arriving in the next 5 years? What if it didn’t have to be realistic?

Not exactly edge-of-your-seat exciting, but I am looking forward to solar panels reaching a point where they make sense, economically.

Big, big friend. In the tech world where teams and people sharing the same interest are so far apart, social media play the role of water cooler and darkened drinking hole where you go and chat with your peers.

If you could have one superpower, what would it be?

It could be argued that I already have uncanny rubber ducking abilities. Which ain’t bad at all as far as super powers go.

If you could be an animal, what would you be and why?

I kind of already have two animal spirits. My Chinese Zodiac sign is the tiger, so there’s a lot of the stripey theme going on around here. And since I parted ways with my thyroid in 2013, I discovered a newfound affinity with the sloth. So I guess that if I had to choose a single animal, I would like to be… a tiger sloth. Fierce, and yet eeeeeasy-going.